This Is Us finale: What was that wild wedding twist and what can we expect in its final season?


'This Is Us' finale: What was that wild wedding twist and what can we expect in its final season?
This story contains details from the Season 5 finale of "This Is Us."

You weren't really expecting a straightforward wedding ceremony for Kevin and Madison on "This Is Us," were you?

Tuesday's Season 5 finale of the emotional NBC drama focused on the couple, who recently became the parents of twins, but their wedding wasn't the only one featured. Viewers also got a glimpse of the cute family wedding Jack (Milo Ventimiglia) and Rebecca (Mandy Moore) staged to soothe their young children years earlier and flashbacks of Kevin's sister, Kate, when she took her vows with Toby.

And, in one of the series' signature switcheroos, there's a surprise future wedding revealed at the end, a moment that will keep fans talking until the show's final season, which premieres in January.

In the season finale, "The Adirondacks," there's plenty of family drama enveloping the Pearsons, including Rebecca's long-delayed apology to Randall (Sterling K. Brown) over denying him information about his birth parents, but this recap focuses on the multitude of matters relating to marriage.

The episode opens with Kevin (Justin Hartley) practicing a speech in front of the mirror on the day of the wedding. In a long-ago timeline, his mother, Rebecca , plans to watch a VHS recording of the infamous "Dynasty" wedding massacre, only to find out that Jack (Milo Ventimiglia) taped a Pittsburgh Pirates game over it. Her anger at her husband, while completely understandable, upsets the children, so Jack and Rebecca pull out the film projector to show them their wedding before staging a impromptu family wedding in their living room.

In the present day, you'd need more than a wedding-cake knife to cut the tension. Toby (Chris Sullivan), anxious about being unemployed, takes a job that will require him to be away from his family three days a week in San Francisco, which upsets Kate (Chrissy Metz). She wants to keep her job in Los Angeles as a  music instructor and isn't excited about having to raise their two young children in Toby's absence.

Meanwhile, Kevin, obsessed with making every wedding detail perfect, nicknames himself Groomzilla. His behavior further suggests that he's not certain Madison (Caitlin Thompson) is the right one for him, a cloud that has long hung over their union.

Perhaps more important, Madison senses Kevin's hesitation. The episode details elements of her backstory, how her mother abandoned her to be raised by a father who taught her to settle for less. She knows Kevin is committed to her and the children, but she wants to marry someone who is in love with her.

Later, Kate, remembering her own wedding ceremony, reconsiders her opposition to Toby's new job and calls her boss, Phillip (Chris Geere of "You're the Worst"), to quit. But the Englishman has changed his tune on Kate, praising her teaching skills and refusing her resignation. Kate then rejects Toby's offer to turn down the new job, but says she wants to keep teaching. Somehow, they'll figure it out.

All those matters eventually take a backseat to the main event. Before the ceremony, Madison tells Kevin she's in love with him and asks if he's in love with her. The question has gnawed at her. He talks about loving their children, their family, but he can't say yes to her question.

Madison calls off the wedding and tells Kevin she's finally reached a point where she won't settle for less.

Rebecca, Kate and Randall try to comfort Kevin, with Rebecca advising her three children that everything will be alright. She also assigns Kevin a task: Build her the house his father once promised her. (Think of that as a Season 6 plot point.)

The season finale reflects the show's essence, "mixing the tragedies and the heartbreak of life, but also the joy and the beauty," creator Dan Fogelman says. "They have to be able to coexist in order to capture what we're trying to capture on this show. Marriages don't always survive. People don't live forever."

And then comes the episode's final marital surprise. Kevin is looking in the hotel mirror again, preparing for a wedding, but it soon becomes clear it wasn't on the day of his ceremony with Madison.

It's four years in the future, as an opened edition of The New Yorker features a photo and article about Randall, headlined "Rising Star," and it appears lovelorn Uncle Nicky (Griffin Dunne) is now married.

Kevin, now 45, heads to another room where he sees Beth and a welcoming Madison, but she's not the bride. Instead, it's Kate, resplendent in a white dress, ready for her second wedding. As Kevin leaves the room, he greets the groom-to-be: It's Phillip, the work colleague who once wanted nothing to do with Kate. Viewers will learn more about him next season, Fogelman says.

He acknowledges the initial shock of that final segment, but says it ultimately plays into the program's optimism.

"Despite multiple reveals of marriages not quite working out, when you cut to that period in the future, everyone feels good," he says. "On first view, you're registering the shock of what you're seeing, but on second view, you can see the feeling and smiles that exist in that moment."

That scene also means yet another timeline to add to the Pearson universe, but Fogelman says writers and viewers are ready.

"We always knew that Season 6 would be ambitious in terms of the way it jumps time, even more ambitious than other seasons. Because our audience has been so devoted and because, hopefully, we smartly set up the contained areas where these future timelines live, I think you're going to have a real sense of resolution and completion for this family," he says. "It's where the mixed-up VHS tapes of this family's existence will coalesce and speak to one another in completion."

‘This Is Us’ Stars Preview the Final Season’s Wedding, New Relationships — and a Vacation?

SPOILER ALERT: Do not read if you have not yet watched the fifth season finale of “This Is Us.”

Mandy Moore has a proposal for the final season of This Is Us: a destination wedding.

When the NBC drama returns in 2022 for its sixth season, the series will spend a great deal of time filling in the blanks between the present-day story of the Pearson family and the glimpses of the future that creator Dan Fogelman has parceled out throughout the run of the show. But, the creator confirmed to Variety, it’ll also tie up some loose story threads relating to the past — most importantly, how widow Rebecca Pearson (Moore) came to be married to her late husband’s best friend, Miguel (Jon Huertas).

Past seasons revealed that the couple reconnected many years after Jack’s (Milo Ventimiglia) death via social media, but that’s about it. Fogelman said after the Season 5 finale that Rebecca and Miguel’s love story will play a large role in Season 6, including their wedding, which Moore has already planned out.

“Jon Huertas and I pitched Dan on Rebecca and Miguel’s wedding and what that would look like,” she told Variety on a very, very small red carpet at “This Is Us'” fifth season FYC drive-in at the Rose Bowl. “I was like, ‘Can we go to Puerto Rico and shoot the wedding?'”

If Fogelman doesn’t take them up on their idea, Moore and Ventimiglia have their own travel-related pitch that they hope to see through (should safety precautions allow). Joked Moore, “Milo and I from Season 1 have been pitching, ‘Can we do a Pearson family vacation somewhere?’ Did they go to Disney? Did they go to the Grand Canyon? I don’t know what the answer is but I think we’re jonesing to go somewhere new.”

There are two locations the show will definitely visit in the final season: The cabin where Rebecca is lying on her deathbed (about 10 or 15 years in the future) and the yet-to-be-revealed location of Kate’s (Chrissy Metz) second wedding as seen in the Season 5 finale, which takes place about five years in the future as she marries her current boss, Phillip (Chris Geere).

Metz revealed that not only was Kate’s ornate wedding gown a beautiful, hand-laid work of art from Hala Bahmet and the costume team, but it also holds a clue to the location of the ceremony.

“It lends itself to potentially where they’ll be getting married,” Metz teased.

While Kate’s future husband only appeared in a couple of episodes as her curmudgeonly new boss thus far, the plan for the character was in the works for a long time. In fact, Geere flew to Los Angeles and underwent strict COVID safety protocols just to do a chemistry read with Metz.

“The moment he spoke the first line, Dan and I were like, ‘Oh OK,'” Metz said. “He just gets the tone. He’s a fan of the show. I think it’s important to him, and he’s a brilliant actor.”

The sixth season will continue to flash-forward to the wedding, but it’ll also show the dissolution of Kate and Toby’s (Chris Sullivan) marriage and how Kate and Phillip’s relationship evolves.

“It’s very hard for me to talk about a new love while I’m in the old love,” Metz said. “Chris Sullivan, I mean, that’s my boy forever in life in life in life. But yeah, I’m excited about Chris Geere!”

Another character potentially embarking on a new journey in love? Madison (Caitlin Thompson), Kate’s best friend-turned-Kevin’s fiancé and mother to his children (who left him at the altar in the fifth season finale). Thompson, who is married to Fogelman, originally played a small part in the series premiere as a member of the support group where Kate and Toby met. But as the seasons went on, the quirky character returned first as comic relief and then as an unexpected emotional anchor and key member of the Pearson family.

While a storybook marriage and twin babies with a movie star was seemingly what the character of Madison would have wanted, Madison realized in the finale that Kevin (Justin Hartley) wasn’t actually in love with her and she deserved more.

“She’s grown so much,” Thompson said. “There’s a lot at stake — they have a family together, so it’s basically committing to not raising a nuclear family and having to figure out how to raise these kids together. I was proud of her in a lot of ways, but also it’s scary and it’s a big risk she’s taking.”

Madison is now an integral character with a flashback back story of her own, and Thompson wants the best for the newly self-actualized character.

“I hope she finds love, whether it’s with [Kevin] or [someone else],” she said. “I hope she has her own happy ending. I think she deserves it and I think she’s seeking it and I think she’s in a healthy place now, which is really exciting. She’s been able to work through a lot of her issues with her family and eating disorders and is ready for love. She’s just got to find the right person.” 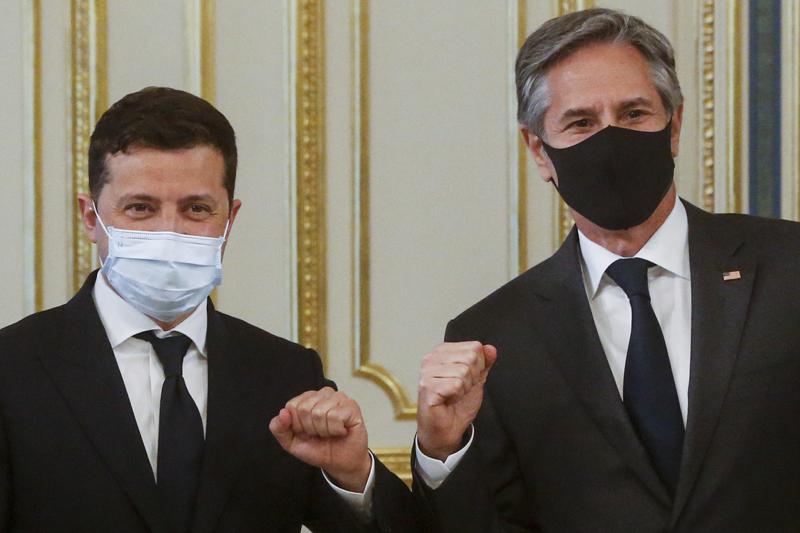 Blinken reaffirms US support for Ukraine amid Russia tension

- Media is seen as the “fourth estate” in modern democracies. It acts as a “watchdog” for state affairs. The media coverage of issues

How Lifelong Fears Overthrow the Presidency of Trump

- How Lifelong Fears Overthrow the Presidency of Trump