The move is a reaction to the severe hospital staffing shortages and crushing caseloads that the omicron variant is causing.

California health authorities announced over the weekend that hospital staff members who test positive but are symptom-free can continue working. Some hospitals in Rhode Island and Arizona have likewise told employees they can stay on the job if they have no symptoms or just mild ones.

The highly contagious omicron variant has sent new cases of COVID-19 exploding to over 700,000 a day in the U.S. on average, obliterating the record set a year ago. The number of Americans in the hospital with the virus is running at about 110,000, just short of the peak of 124,000 last January.

Many hospitals are not only swamped with cases but severely shorthanded because of so many employees out with COVID-19.

At the same time, omicron appears to be causing milder illness than the delta variant.

Last month, the Centers for Disease Control and Prevention said that health care workers who have no symptoms can return to work after seven days with a negative test, but that the isolation time can be cut further if there are staffing shortages.

France last week announced it is allowing health care workers with mild or no symptoms to keep treating patients rather than isolate.

In the Phoenix area, Dignity Health, a major hospital operator, sent a memo to staff members saying those infected with the virus who feel well enough to work may request clearance from their managers to go back to caring for patients. Dignity Health hospitals in California have not yet implemented the new guidelines but said it may need to do so in the coming days and weeks.

“We are doing everything we can to ensure our employees can safely return to work while protecting our patients and staff from the transmissibility of COVID-19,” Dignity Health said in a statement.

In California, the Department of Public Health said the new policy was prompted by “critical staffing shortages.” It asked hospitals to make every attempt to fill openings by bringing in employees from outside staffing agencies.

Also, infected workers will be required to wear extra-protective N95 masks and should be assigned to treat other COVID-19-positive patients, the department said.

“We did not ask for this guidance, and we don’t have any information on whether hospitals will adopt this approach or not,” said Jan Emerson-Shea, a spokesperson for the California Hospital Association. “But what we do know is that hospitals are expecting many more patients in the coming days than they’re going to be able to care for with the current resources.”

Emerson-Shea said many hospital workers have been exposed to the virus, and are either sick or caring for family members who are.

The 100,000-member California Nurses Association came out against the decision and warned it will lead to more infections.

Gov. Gavin Newsom and other state health leaders “are putting the needs of health care corporations before the safety of patients and workers,” Cathy Kennedy, the association’s president, said in a statement. “We want to care for our patients and see them get better — not potentially infect them.”

Earlier this month in Rhode Island, a state psychiatric hospital and a rehabilitation center allowed staff who tested positive for COVID-19 but were asymptomatic to work.

At Miami’s Jackson Memorial Hospital, chief medical officer Dr. Hany Atallah said they are not yet at the breaking point and that workers who test positive are staying away for five days. “We still have to be very careful to prevent spread in the hospital,” he said.

Kevin Cho Tipton, a nurse at Jackson Memorial, said he understands why hospitals are eager to have employees come back after five days of isolation. Yet he worries about the potential risk, especially for patients at higher risk of infection, such as those receiving transplants.

“Yes, omicron is less deadly, but we still don’t know much,” he said.

Under the new policy, first detailed to the AP, Americans will be able to either purchase home testing kits for free under their insurance or submit receipts for the tests for reimbursement, up to the monthly per-person limit. A family of four, for instance, could be reimbursed for up to 32 tests per month. PCR tests and rapid tests ordered or administered by a health provider will continue to be fully covered by insurance with no limit.

President Joe Biden faced criticism over the holiday season for a shortage of at-home rapid tests as Americans traveled to see family amid the surge in cases from the more transmissible omicron variant. Now the administration is working to make COVID-19 home tests more accessible, both by increasing supply and bringing down costs.

Later this month, the federal government will launch a website to begin making 500 million at-home COVID-19 tests available via mail. The administration also is scaling up emergency rapid-testing sites in areas experiencing the greatest surges in cases.

The insurer-covered testing would dramatically reduce costs for many Americans, and the administration hopes that by easing a barrier to more regular at-home testing, it can help slow the spread of the virus, get kids back into school more quickly and help people gather safely.

“This is all part of our overall strategy to ramp up access to easy-to-use, at-home tests at no cost,” Health and Human Services Secretary Xavier Becerra said in a statement. “By requiring private health plans to cover people’s at-home tests, we are further expanding Americans’ ability to get tests for free when they need them.”

Biden announced the federal requirement late last year, and it kicks in on Jan. 15, but the administration had been silent until now on details of the plan.

The administration is trying to incentivize private insurers to cover the tests up-front and without a cumbersome reimbursement process. Insurance plans that work with pharmacies and retailers to cover the up-front costs of the tests will be required to reimburse only up to $12 per test if purchased through an out-of-network retailer. Plans that don’t move proactively to set up a network of pharmacies would have to cover the full retail price that the customer paid — which could be more than $12 per test. 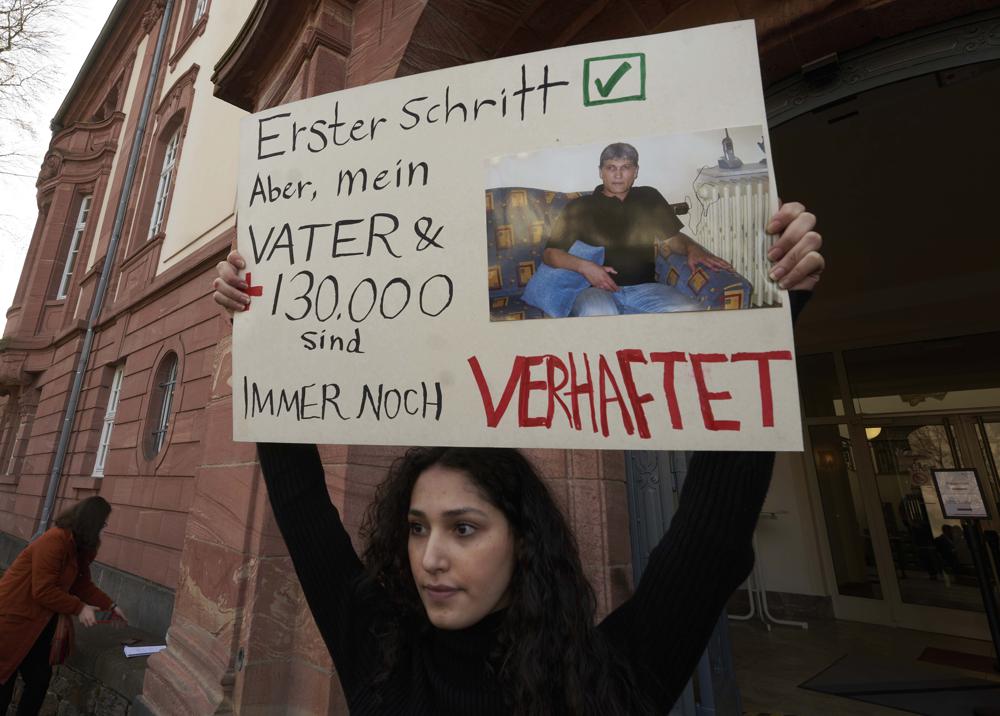 For victims, Syria torture trial is 1st step toward justice

- The Washington, D.C., archbishop who slammed President Donald Trumps visit to a Roman Catholic shrine in the city has become the first African American cardinal.