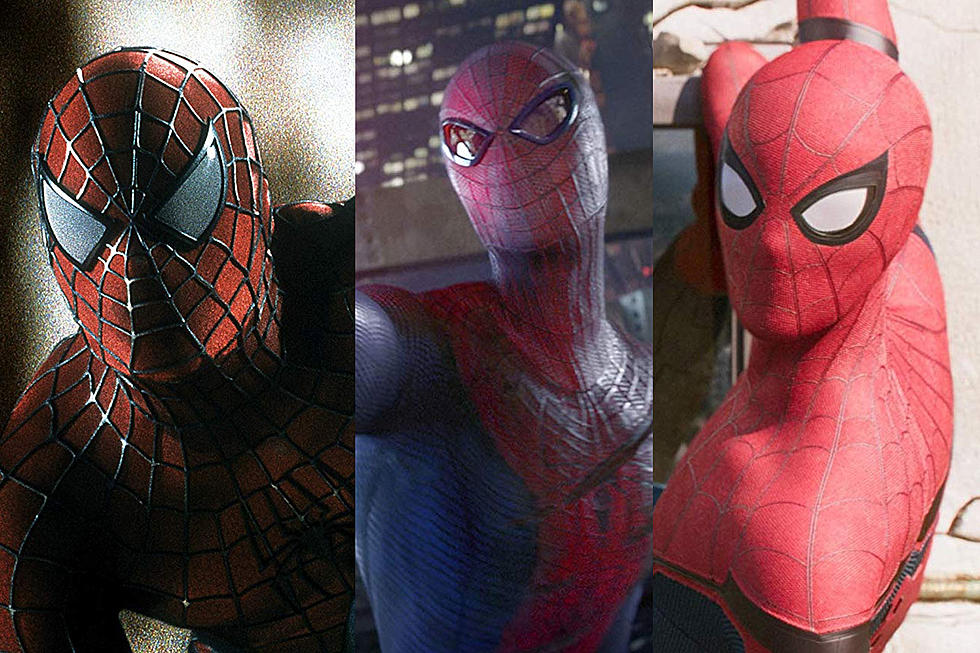 Spider-Man is a fictional superhero created by writer-editor Stan Lee and writer-artist Steve Ditko. He first appeared in the anthology comic book Amazing Fantasy #15 (Aug. 1962) in the Silver Age of Comic Books. He appears in American comic books published by Marvel Comics, as well as in a number of movies, television shows, and video game adaptations set in the Marvel Universe. In the stories, Spider-Man is the alias of Peter Parker, an orphan raised by his Aunt May and Uncle Ben in New York City after his parents Richard and Mary Parker died in a plane crash. Lee and Ditko had the character deal with the struggles of adolescence and financial issues, and accompanied him with many supporting characters, such as J. Jonah Jameson, Harry Osborn, Max Modell, romantic interests Gwen Stacy and Mary Jane Watson, and foes such as Doctor Octopus, the Green Goblin and Venom. His origin story has him acquiring spider-related abilities after a bite from a radioactive spider; these include clinging to surfaces, superhuman strength and agility, and detecting danger with his "spider-sense." He then builds wrist-mounted "web-shooter" devices that shoot artificial spider-webbing of his own design.

When Spider-Man first appeared in the early 1960s, teenagers in superhero comic books were usually relegated to the role of sidekick to the protagonist. The Spider-Man series broke ground by featuring Peter Parker, a high school student from Queens behind Spider-Man's secret identity and with whose "self-obsessions with rejection, inadequacy, and loneliness" young readers could relate.[10] While Spider-Man had all the makings of a sidekick, unlike previous teen heroes such as Bucky and Robin, Spider-Man had no superhero mentor like Captain America and Batman; he thus had to learn for himself that "with great power there must also come great responsibility"—a line included in a text box in the final panel of the first Spider-Man story but later retroactively attributed to his guardian, the late Uncle Ben Parker.

Marvel has featured Spider-Man in several comic book series, the first and longest-lasting of which is The Amazing Spider-Man. Over the years, the Peter Parker character developed from a shy, nerdy New York City high school student to troubled but outgoing college student, to married high school teacher to, in the late 2000s, a single freelance photographer. In the 2010s, he joins the Avengers, Marvel's flagship superhero team. Spider-Man's nemesis Doctor Octopus also took on the identity for a story arc spanning 2012–2014, following a body swap plot in which Peter appears to die.[11] Marvel has also published books featuring alternate versions of Spider-Man, including Spider-Man 2099, which features the adventures of Miguel O'Hara, the Spider-Man of the future; Ultimate Spider-Man, which features the adventures of a teenaged Peter Parker in an alternate universe; and Ultimate Comics Spider-Man, which depicts the teenager Miles Morales, who takes up the mantle of Spider-Man after Ultimate Peter Parker's supposed death. Miles is later brought into mainstream continuity, where he sometimes works alongside Peter.

Spider-Man is one of the most popular and commercially successful superheroes.[12] As Marvel's flagship character and company mascot, he has appeared in countless forms of media, including several animated and live action television series, syndicated newspaper comic strips, and in a series of films. The character was first portrayed in live action by Danny Seagren in Spidey Super Stories, a The Electric Company skit which ran from 1974 to 1977.[13] In films, Spider-Man has been portrayed by actors Tobey Maguire, Andrew Garfield,[14] and in the Marvel Cinematic Universe by Tom Holland. He was voiced by Chris Pine and Jake Johnson in the animated film Spider-Man: Into the Spider-Verse. Reeve Carney starred originally as Spider-Man in the 2010 Broadway musical Spider-Man: Turn Off the Dark.[15] Spider-Man has been well received as a superhero and comic book character, and he is often ranked as one of the most popular and iconic comic book characters of all time and one of the most popular characters in all fiction.

Creation and development
In 1962, with the success of the Fantastic Four, Marvel Comics editor and head writer Stan Lee was casting about for a new superhero idea. He said the idea for Spider-Man arose from a surge in teenage demand for comic books, and the desire to create a character with whom teens could identify.[17]:1 In his autobiography, Lee cites the non-superhuman pulp magazine crime fighter the Spider as a great influence,[16]:130 and in a multitude of print and video interviews, Lee stated he was further inspired by seeing a spider climb up a wall—adding in his autobiography that he has told that story so often he has become unsure of whether or not this is true.[note 1] Although at the time teenage superheroes were usually given names ending with "boy", Lee says he chose "Spider-Man" because he wanted the character to age as the series progressed, and moreover felt the name "Spider-Boy" would have made the character sound inferior to other superheroes.[18] He also decided to insert a hyphen in the name, as he felt it looked too similar to Superman, another superhero with a red and blue costume which starts with an "S" and ends with "man"[19] (although artist Steve Ditko intended the character to have an orange and purple costume).[20] At that time Lee had to get only the consent of Marvel publisher Martin Goodman for the character's approval. In a 1986 interview, Lee
described in detail his arguments to overcome Goodman's objections.[note 2] Goodman eventually agreed to a Spider-Man tryout in what Lee in numerous interviews recalled as what would be the final issue of the science-fiction and supernatural anthology series Amazing Adult Fantasy, which was renamed Amazing Fantasy for that single issue, #15 (cover-dated August 1962, on sale June 5, 1962).[21] In particular, Lee stated that the fact that it had already been decided that Amazing Fantasy would be canceled after issue #15 was the only reason Goodman allowed him to use Spider-Man.[18] While this was indeed the final issue, its editorial page anticipated the comic continuing and that "The Spiderman [sic] ... will appear every month in Amazing."

Regardless, Lee received Goodman's approval for the name Spider-Man and the "ordinary teen" concept and approached artist Jack Kirby. As comics historian Greg Theakston recounts, Kirby told Lee about an unpublished character on which he had collaborated with Joe Simon in the 1950s, in which an orphaned boy living with an old couple finds a magic ring that granted him superhuman powers. Lee and Kirby "immediately sat down for a story conference", Theakston writes, and Lee afterward directed Kirby to flesh out the character and draw some pages.[23] Steve Ditko would be the inker.[note 3] When Kirby showed Lee the first six pages, Lee recalled, "I hated the way he was doing it! Not that he did it badly—it just wasn't the character I wanted; it was too heroic".[23]:12 Lee turned to Ditko, who developed a visual style Lee found satisfactory. Ditko recalled:

One of the first things I did was to work up a costume. A vital, visual part of the character. I had to know how he looked ... before I did any breakdowns. For example: A clinging power so he wouldn't have hard shoes or boots, a hidden wrist-shooter versus a web gun and holster, etc. ... I wasn't sure Stan would like the idea of covering the character's face but I did it because it hid an obviously boyish face. It would also add mystery to the character....[24]

Although the interior artwork was by Ditko alone, Lee rejected Ditko's cover art and commissioned Kirby to pencil a cover that Ditko inked.[21] As Lee explained in 2010, "I think I had Jack sketch out a cover for it because I always had a lot of confidence in Jack's covers."[25]

In an early recollection of the character's creation, Ditko described his and Lee's contributions in a mail interview with Gary Martin published in Comic Fan #2 (Summer 1965): "Stan Lee thought the name up. I did costume, web gimmick on wrist & spider signal."[26] At the time, Ditko shared a Manhattan studio with noted fetish artist Eric Stanton, an art-school classmate who, in a 1988 interview with Theakston, recalled that although his contribution to Spider-Man was "almost nil", he and Ditko had "worked on storyboards together and I added a few ideas. But the whole thing was created by Steve on his own... I think I added the business about the webs coming out of his hands."[23]:14 Ditko claimed in a rare interview with Jonathan Ross that the costume was initially envisioned with an orange and purple color scheme rather than the more famous red and blue.

Kirby disputed Lee's version of the story and claimed Lee had minimal involvement in the character's creation. According to Kirby, the idea for Spider-Man had originated with Kirby and Joe Simon, who in the 1950s had developed a character called the Silver Spider for the Crestwood Publications comic Black Magic, who was subsequently not used.[note 4] Simon, in his 1990 autobiography, disputed Kirby's account, asserting that Black Magic was not a factor, and that he (Simon) devised the name "Spider-Man" (later changed to "The Silver Spider"), while Kirby outlined the character's story and powers. Simon later elaborated that his and Kirby's character conception became the basis for Simon's Archie Comics superhero the Fly.[28] Artist Steve Ditko stated that Lee liked the name Hawkman from DC Comics, and that "Spider-Man" was an outgrowth of that interest.

Simon concurred that Kirby had shown the original Spider-Man version to Lee, who liked the idea and assigned Kirby to draw sample pages of the new character but disliked the results—in Simon's description, "Captain America with cobwebs".[note 5] Writer Mark Evanier notes that Lee's reasoning that Kirby's character was too heroic seems unlikely—Kirby still drew the covers for Amazing Fantasy #15 and the first issue of The Amazing Spider-Man. Evanier also disputes Kirby's given reason that he was "too busy" to draw Spider-Man in addition to his other duties since Kirby was, said Evanier, "always busy".[29]:127 Neither Lee's nor Kirby's explanation explains why key story elements like the magic ring were dropped; Evanier states that the most plausible explanation for the sudden change was that Goodman, or one of his assistants, decided that Spider-Man, as drawn and envisioned by Kirby, was too similar to the Fly.[29]:127

Author and Ditko scholar Blake Bell writes that it was Ditko who noted the similarities to the Fly. Ditko recalled that "Stan called Jack about the Fly", adding that "[d]ays later, Stan told me I would be penciling the story panel breakdowns from Stan's synopsis." It was at this point that the nature of the strip changed. "Out went the magic ring, adult Spider-Man and whatever legend ideas that Spider-Man story would have contained." Lee gave Ditko the premise of a teenager bitten by a spider and developing powers, a premise Ditko would expand upon to the point he became what Bell describes as "the first work for hire artist of his generation to create and control the narrative arc of his series". On the issue of the initial creation, Ditko sta

IBM C2090-102 Certification - Boosting You Up the Career Ladder