The Music Gallery: Can Music Ever Be Valued As Fine Art?

Recently a Christie's art sale became the highest auction in history. The sale included works by Jackson Pollock, Roy Lichtenstein and Jean-Michel Basquiat, among others and in total generated $495 million. The sale established 16 new world auction records, with nine works selling for more than $10m (£6.6m) and 23 for more than $5m (£3.2m). Christie's said the record breaking sales reflected "a new era in the art market".

Lichtenstein's Woman with Flowered Hat sold for $56.1 million, while another Basquiat work, Dustheads (top of article), went for $48.8 million.

All three works set the highest prices ever fetched for the artists at auction. Christie's described the $495,021,500 total - which included commissions - as "staggering". Only four of the 70 lots on offer went unsold.

In addition, a 1968 oil painting by Gerhard Richter has set a new record for the highest auction price achieved by a living artist. Richter's photo-painting Domplatz, Mailand (Cathedral Square, Milan) sold for $37.1 million (£24.4 million). Sotheby's described Domplatz, Mailand, which depicts a cityscape painted in a style that suggests a blurred photograph, as a "masterpiece of 20th Century art" and the "epitome" of the artist's 1960s photo-painting canon. Don Bryant, founder of Napa Valley's Bryant Family Vineyard and the painting's new owner, said the work "just knocks me over".

When I came across this article I was stunned at the prices these artworks were able to obtain. Several of them would hardly evoke a positive emotional response in me, while others might only slightly, but for almost all of them I really don't understand how their prices are reflected in the work, and vice versa. Obviously, these pieces were not intended for people like me, an artist, while wealthy patrons certainly see their intrinsic artistic value clearly.

So why doesn't music attract these kinds of prices? Is it even possible for a piece of recorded music, not music memorabilia or a music artifact (such as a rare record, LP, bootleg, T-shirt, album artwork, etc.), to be worth $1 million or more? Are all musicians and music composers doomed to struggle in the music industry and claw their way up into a career in music? If one painting can be valued at $1 million, why can't a song or piece of music also be valued similarly? Apparently, the $.99 per download price is the highest price a song is able to command at market value, no matter what its quality or content, and the musician or composer must accept this value as such.

Sometimes people say that a song can change the world, but no one ever says that about paintings. So theoretically, if people want change $.99 is the price we must pay for it.

Now here are a few statements that should help us clarify what the monetary or value discrepancy between painting and music is based upon.

(1) There are fewer painters than there are musicians.

(2) Musicians are less talented than painters?

(3) It is easier to create music than it is to paint.

(5) Paintings are more beautiful than music.

(6) Paintings are impossible to copy unlike music.

Hardly anyone agrees with all of these statements and yet all, or at least some of them, would have to be true in order for the price of paintings to so greatly exceed the cost of music. Moreover, I doubt that art collectors and great painters have to deal with as much legal red tape as do musicians when releasing their work into the public domain, so why aren't the rewards equal, if not greater for musicians who have to work almost as much protecting their work as in producing it. Musicians and composers, however, actually must do more than authenticate their work and obtain accurate appraisals concerning what their work is worth, but they get paid less. The equipment costs alone for musicians is much higher than it is for painters.

Maybe it's fame, and not money, musicians are after? That would explain why most musicians settle for the low pay they receive from record deals and digital downloads. Perhaps, that's also why many of them are touring more often to increase their fame and not their fortunes. But wait a minute, that's where musicians actually make most of their money from live performances and the selling of merchandise, but not the music. I guess this is why many musicians see themselves not as composers, but rather as performers and entertainers.

So what can musicians do, who don't see themselves as entertainers, but instead as composers who create music as a fine art? Because they too have a strong desire to earn a living to support themselves in their chosen profession, thus there must be a specialized approach whereby they present their work to music lovers or art collectors in search of assets and curators for unique pieces to place in their private galleries. Imagine that, a recorded piece of music that few have ever heard which is displayed and played only on a specified music player in a private art gallery or collection.

In thinking about how a musician can follow the example set by painters in the fine arts, I've isolated 4 principles that should help to make the spectacular financial rewards they've reached possible for the musician. So let's analyze some of the characteristics that govern the market for fine art and see how musicians can apply these concepts to their creative, production, and marketing processes. 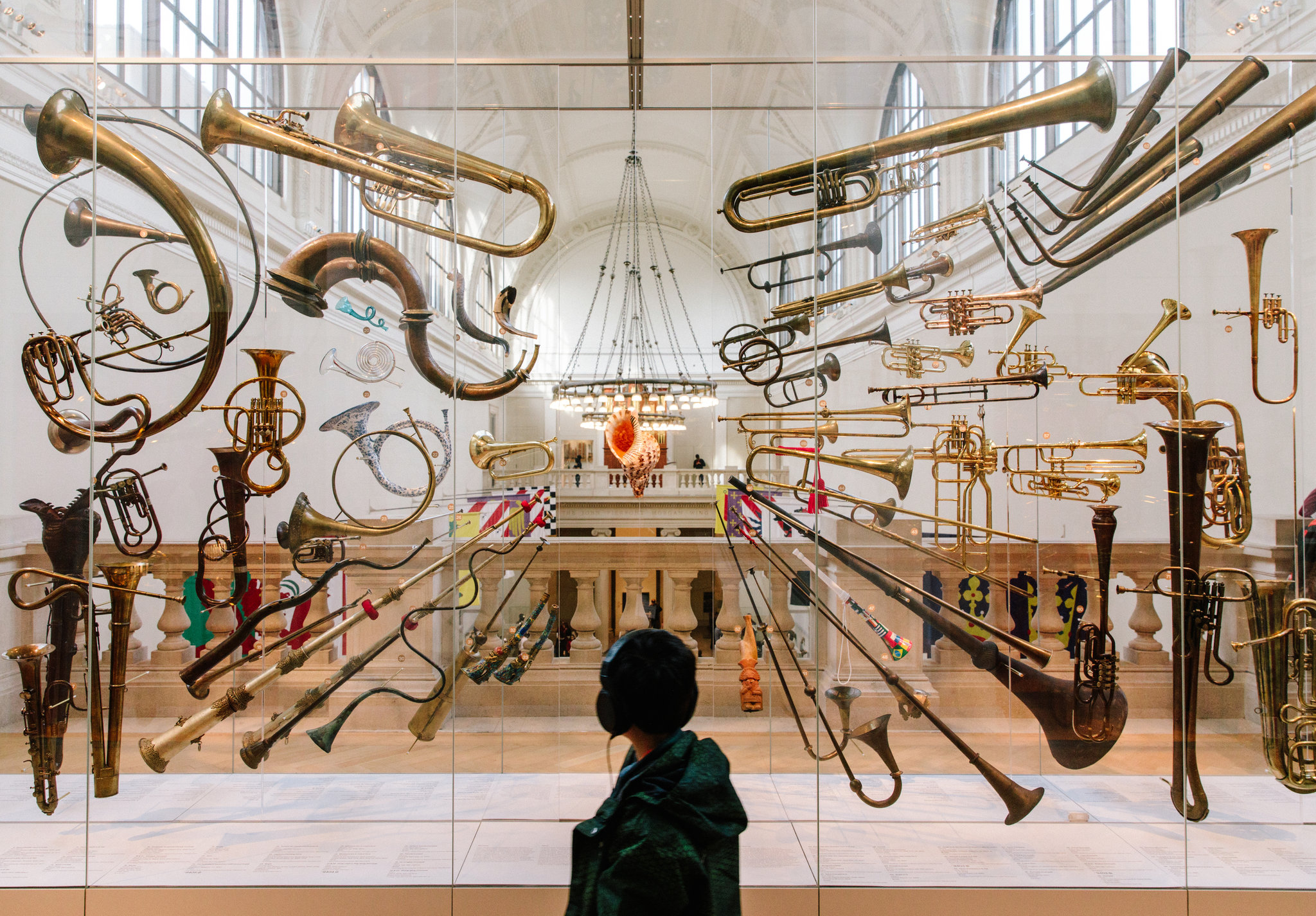 The Ideal Vehicle for Music as Fine Art

Here are 4 principles and practical suggestions for musicians who want to elevate their music into the realm of fine art by following the example of the painters of the past and present.

The composer must design experiments with sound or compositional techniques. Some music belongs in the realm of the public, while other music solely belongs in the realm of fine art. It's really not that difficult to tell the difference. The difference is clear when one compares the environment of the nightclub and the music one finds there with the elevated environment of the ballet or opera and its music. The difference is not necessarily one in terms of types of music, but rather in the composer's sonic fingerprint. In other words, not everyone thinks Jackson Pollock was a great painter, but everyone acknowledges that it took him years of development to reach a point where his style could be born. It's the style of the artist or composer that will call out to the attention of wealthy patrons, the respect of peers, and the exclusive admiration of the music appreciator. In music, the style of the composer, regardless of genre, I call 'a signature sound.' It's the signature sound that music and art collectors will want to own and for that they might be willing to pay or bid up the cost of ownership to a higher price.

This could be modeled after the art gallery where one or several artist put their work on display. The difference with the music gallery is that you would have a hall filled with listening rooms or stations. These showings would not be live performances, but instead will be in effect sound installations. You could also separate one hall into several compartments for different composers. The music showing would be an exclusive event provided to serious music and art collectors who actively seek out sonic experiences and buy what they like. The purpose of the music gallery would be the same as the art gallery - to give the public a sample of the artist's talent, to give critics something to write about, to have other composers comment on the work of a peer, and to create buzz in the art world. Always remember that it shouldn't be the event that drives the buzz, but the music that makes the event.

3) Turn your music into a tangible asset.

The obvious difference between a painting and music is that one is a tangible artwork and the other is not. In other words, one of the defining characteristics of a painting is that the medium and the art are one. Unlike music, where the music must be transferred onto another object such as a cassette tape, vinyl, CD, or mP3 player before it can be perceived, whereas with a painting (or sculpture) an object has been transformed into art. So how can it be or is it even possible for a cassette, CD, or download to be transformed into art? The cassette and CD are more akin to a photograph of a painting, rather than a true expressions where the medium and the art are one.

So one step a musician can take to elevate their music into fine art is by making your music and its medium one. The best way that I can think of to do this is by looking to the past. Ironically, the vinyl LP very closely achieved this quality with album art, its sizing, and packaging. Let's quickly discuss some of the qualities of the vinyl LP and valuable marketing angles that I think opens up interesting approaches for musicians to turn their music into fine art at price appropriate levels commiserate with earning a livelihood.

Today there are several companies around that let you customize your LP vinyl album and artwork. This is wonderful because it gives you total control over the art direction your packaging takes. This is an expressive way to bring the personality of the artist, band, or project out into physical form. Many colors are available and unique mixtures are also possible to add a dimension to your music that isn't normally possible with cassette tapes, CD's, or digital downloads. Even split colored and glow-in-the-dark vinyl are available for bold composers looking for something with a bit more flair.

Etched Art and Your Album

Another fantastic way to elevate the music via packaging and presentation is to consider etched art in vinyl. Etched vinyl is an image pressed into the unplayable side of your record which has a frosted appearance. The etched side does not contain any grooves or music but adds a real touch of style to your music package. I don't know if etched art can also be a hologramic look, but that would be another dimension that would enhance the visual component of your music package.

Wintry Scenes From a Swedish Wonderland #1

- Wintry Scenes From a Swedish Wonderland

- This professional and polished way of hanging artworks and photos is how the galleries have been doing it for years.