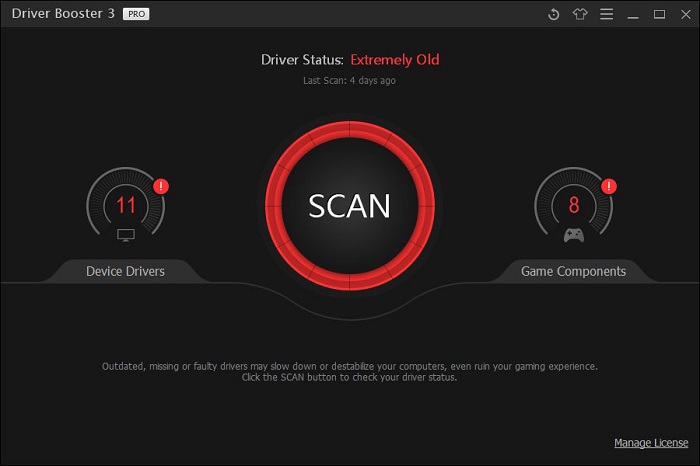 Are you worried that Driver Booster is an infected program and it is not safe to use on your computer? Your worry is not entirely meaningless. There have been questions regarding the authenticity of this software in the past. In this article, we will know about these questions and answer to the biggest one “Is Driver Booster safe?”

IObit Driver Booster is a computer utility that finds and correct corrupted system drivers. It has an extensive database of drivers over 1 Million. It automatically identifies the corrupted drivers and updates them quickly. You don't need to find what driver is causing the problem and then download the update manually. It follows compression mechanism to update the drivers 30% faster. It also creates a system restore points before updating the driver so that when anything goes wrong, you can restore your computer.

VirusTotal analyses a program and checks its status with different antivirus engines. We uploaded the Driver Booster installer on VirusTotal to see its score. It gets detected in 4 antivirus engines out of 65. Meaning 61 antivirus​ engines think it is safe and 4 antivirus​ are considering it unsafe. I would say it’s a pretty good score.

IObit Driver booster always has been accused of bundling adware with their program. In 2016, Malwarebytes antimalware started blocking the IObit products because of bunded PUPs with their installer. Most of the antivirus engines are considering it as PUP. Antivirus engines haven't trusted it completely. However, IObit has never accepted that they have bundled other software with their installer. Users must have downloaded the crack or pirated version of Driver Booster. Many users have complained in forums that Driver Booster has messed with their computer. They reported that after updating the driver, many functionalities of the system are not working. However, Driver Booster supports restoring the drivers. It is clear users aren't aware of this feature.

If we look into the user’s opinion from the forums, it is mixed. Few people think it is dangerous while few think it is safe. On MalwareTips Forum Spawn reply to the question “Is Driver Booster safe?”

There are mixed reviews of Driver Booster on the forums. The common thing most users are saying it is unnecessary to install such kind of tool. It is safer to download the drivers from official websites and install them manually than trusting on a third party tool.

IObit the software company who created Driver Booster was founded in 2004. Since then they have released several tools. They have a PC cleaning and optimization tool, malware fighter, Uninstaller and the driver updation tool. IObit products have 250 million downloads worldwide.

A software company running successfully for 14 years will never willingly include malware in their products. However, do we need these tools the company is offering or not, is a question we must ask ourselves?

Driver Booster is a legitimate program. However, if you are not downloading it from the official website, no one is sure what kind of malware it contains. I must say that the program itself is clean, but we need to check the installation steps so that it cannot install unnecessary programs on our computer.

If you are worried about the security of your computer, I would suggest you do not install any driver installation tool and give a try to Windows inbuilt device manager to see what driver is missing or outdated and then download it from the official website.

I used Driver Booster it and it fixed my machine. I was having USB shut down problems that were caused by my corsair cooler plus ASUS has not updated the drivers for my very expensive out of date 2011 CPU motherboard. My machine still warrants an 83% at Futuremark. Corsair drivers are, well bad. I know how one and zeros work and these days if you are not a computer genius it is hard to find every driver requiring an upgrade. Especially if you are still running the Free Windows 10 program or turned off all the connected programs. Now here is want happened to me. Malwarebytes had no problem with the program Driver Booster but after I let the purchase date of the program pass. BAM! Driver booster became unwanted. What I am going to do is leave the quarantined scripts where they are. When I want to use Driver Boost again I will un-quarantine the programs, used drive boost then let malware bytes quarantine the programs again. Driver boost works. Too bad it turns bad when you don’t buy it.

Have you suffered from bad resolutions or poor sound quality on your PC? These can be caused by your outdated display adapters and missing sound card. You may need Driver Booster 7 to update more than 3,000,000 device drivers and game components for top PC performance. All downloaded drivers come from the official manufacturers’ websites and have passed both Microsoft WHQL test and IObit test for ensuring authority and security.

External devices connecting to the computer like the printer, mouse, Wi-Fi and webcam could stop responding or working due to the driver issues. Driver Booster 7 offers the latest device drivers to help users fix “device not working” problem caused by outdated and missing drivers. You can also use Driver Booster 7 to update drivers for your Bluetooth, card reader, chipset, network card, controller, modem, monitor, and other devices.

Driver Booster 7 is a convenient driver updater for you. It can help detect and update outdated drivers efficiently. Plus, the scanning speed of this driver updater has been improved by almost 100%, which saves you more time to acquire your driver status. If you still need more convenience, you can activate auto driver update to get the latest updates in real time.

"Driver Booster, from IObit, promises an easier solution with its most advanced driver update technology by acting as an all-in-one command center. All of your drivers are listed in the app’s interface, making it a super easy process to update drivers. Downloading and installing drivers with this driver updater is a cinch and often takes just minutes (or less)."

"One scan a day keeps outdated drivers away. Instead of looking individually for drives updates; just one click on Driver Booster can keep all of my pc's drivers up-to-date! Driver Booster improved my gaming experience especially when it comes to demanding games that needs the latest updates. IObit products showed me the true capability of my pc."

"I was having all sorts of problems with my laptop, finally realizing that it was caused by the drivers. Despite going through all the channels my laptop brand provides I was still having problems. One click of Driver Booster and it found 17 (long) outdated drivers and fixed them just as quickly. My driver problems have disappeared and my laptop is running much better! I will use no other program for my driver needs."

You'll be greeted with four basic options: Scan, Protect, Update, and Action Center. Since version 1.7, IObit's latest design feels much cleaner and certainly more intuitive for the average user. The original overview graph that the previous version opened with is now tucked away.

Previously included features like cloud scanning and quarantine lists are still present, but reside in a more modernized settings panel to the right, labeled by monochromatic icons. Scanning settings and options exist as on/off switches, similar to those in Windows 8. Make no mistake: Version 2.0 is undoubtedly developed for touch screens.

Though this version is free, that also means it's ad supported. However, IObit has opted to remove all the extraneous social-sharing options, with the exception of a Like button on the bottom right; again, we've never used it but if you're really into it, then the option is there.

We ran a full scan to first test for any bogus claims of "threats" that come from detecting the usual temp files cached by your browser, as well as other common false alerts. IObit came out clean, which was a good sign. Scan speeds were also respectable given the state of our file system. You can also set custom scans and isolate Malware Fighter to look for threats just within your memory processes or select drives.

One minor issue we had with Malware Fighter was that it classifies the absence of Advanced SystemCare and Smart Defrag as "problems." There's no option to clear out these warnings, and choosing to fix them results in an automatic download and installation of IObit's other product offerings.

Compared to its previous version, IObit Version 2.0 is a step in the right direction despite its questionable labeling of ASC and Smart Defrag. But if you're looking for an easy-to-use, lightweight malware scanner, then Malware Fighter does the job.

With the new generation of IObit Anti-malware Engine and 1.6x larger database, IObit Malware Fighter 7 accelerates scanning speed up to 300% and ensures more efficient threats detection and removal. Meanwhile, the latest world-leading Bitdefender engine which adopts new cyber-threat intelligence technologies brings much higher virus killing rate. And the enhanced Anti-ransomware Engine keeps your PC away from the latest ransomware attacks. No worries about your files being encrypted by hackers or illegally accessed by third-party programs.

What's more, IObit Malware Fighter 7 also strives to offer you a more secure browser and system with enhanced Data Protect, Browser Protect, and Security Guard. To fully protect your privacy and sensitive data from unauthorized accesses, IObit Malware Fighter 7 adds new password protection to Safe Box to maximize the security of your privacy and data. No one can access your protected data without the correct password. Besides, the rebuilt Surfing Protection & Ads Removal newly supports Microsoft Edge and blocks more cryptocurrency mining at