The Continuity of the Battle of the Phoenix Festa in Asterisk War S.2


Season 2 finally released after 1 season of waiting. This time Ayato will continue his battle in the phoenix festa and meet new enemies who are very strong and almost defeat him. coupled with the appearance of hired criminals targeting them. what are they like? 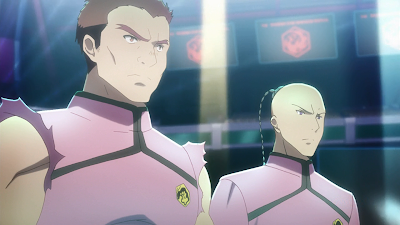 These 2 Genestella were the direct teaching students of the student council president Jie Long, Fan Shinlu so they were greatly feared. Song with short hair mastered the martial arts with a stick where the punches would be very painful while Luo was good at barehanded martial arts. the two of them have very good cooperation so that they can corner ayato. With his smart strategy, the two of them were defeated with a surprise attack. Song and Luo are so strong that they almost beat Ayato. 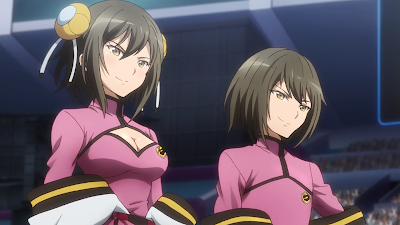 The two brothers shenyun (boy) and shenhua (girl) who are considered the demons of Jie Long. skilled at strategy, surprise attacks, traps and tactics. Has a cruel nature that likes to torment enemies and almost defeat Ayato and Julis completely battered. They both have ninja-like abilities and large amounts of talisman paper that they keep under their clothes. This paper talisman can explode, emitting illusory hail, lightning can even be translucent so that it can become an invisible bomb. Shenyun and Shenhua have a technique of being invisible and creating fake clones. because smart, they managed to read all the tactics of Ayato and julis. When pressed, Ayato managed to remove some of his power seals so that he could use his ser-veresta's ability for more than 5 minutes, which is about 1 hour. 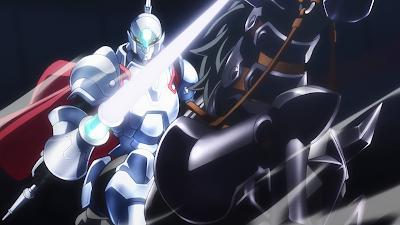 Garardworth's students are known to be strong even though they eventually were defeated easily by Ayato and Julis. Elliot is considered a child prodigy due to his extraordinary sword skills and Doroteo is a veteran phoenix festa participant having followed him three times. Has the ability to bring horses and armor that can protect it from any attacks and is able to regenerate. Armed with an iron spear and armor he fiercely fought Julis. Even though he has strong armor but he lost because he could not withstand the heat from the fire while Elliot lost in a sword fight with Ayato

In the final, Aldy uses his extraordinary abilities to defeat Ayato. He joined the rimsy so that his true strength rose. Aldy had defeated Kirin and I in the previous battle with this form. Aldy's speed and strength increase many times because he gets additional mana from rimsy. plus the throwing hammer weapon called the Wolnir Hammer. has tremendous destructive power. ayato manages to beat him with difficulty after he gets a boost from

This cute boy is a maid in his kingdom. he is one of the children at the orphanage who is friends with Julis. Very affectionate and spoiled for writing who is very attentive to him He was caught by Eberwein's subordinates to be held hostage so that Ayato would not use Ser-veresta in battle. In the end he was released by

Wernher is a shadow ninja who captures Flora on the orders of eberwein. He has the ability to control shadows as an attack tool plus his ability to use knives. He was finally beaten by Krin and shot by me but managed to escape. He had given kirin a fatal wound. when he managed to escape into a sewer. He meets Yabuki, Ayato's close friend who turns out to be Claudia's order and plays a role in the dark side of seido. Yabuki finally slaughtered Wernher right then and there

This cute girl comes from the Queenvail girls school and is one of her page one who has extraordinary voice skills. It is even able to track a person's position by scattering notes all over the place. Thanks to that, Ayato managed to find the location of the hostage flora and immediately searched for it. This girl seems interested in Ayato

The organizer of this year's phoenix festa. Behind his calm and mature nature, he is a cunning person who collaborates with eberwein to hide the body of Amagiri Haruka, Ayato's sister. He was the one who managed to beat Haruka in the Eclipse fest, which is a wilder festa match where the match is stopped if one of the participants can't move anymore or dies. It is suspected that Mesa will be Ayato's most dangerous enemy. Mesa had shown Haruka's body to Ayato who was being treated in a water tube, he said that Haruka was in a coma. I don't know what plans he was carrying out against Ayato

Ayato's brother taught him various amagiri sword techniques and of course it is stronger than Ayato. It is he who has sealed some of Ayato's powers so as not to endanger those around him. A few months later, Haruka got into seido and used ser-veresta but then he disappeared. Ayato comes to Seidoukan to find his brother, who Mesa and eberwein have been hiding all this time.

This red-haired man in casual clothes is the brother of Julis and the king of his country. He was liked by the government because he was not interested in politics so he never bothered and interfered. Like fun and do whatever he wants to write. Jolbert had invited Julis et al to his kingdom to party in order to celebrate his victory at Julis in the phoenix festa. Very fond of these younger siblings.

A hit man hired by Claudia's father to exterminate his friends so he won't be able to join the Gryps Festa, an even higher festa match. This grandfather has the ability to summon creatures that are quite powerful, including Cerberus, Chimaera and Hydra, who had messed up the kingdom. With the help of Ayato et al, they managed to defeat the giant hydra and catch gustav

Wrote's old friend at the orphanage first and he was the closest to him. Orphelia was the one who gave Julis favorite handkerchief. Orphelia was originally just an ordinary child who really liked plants. However, because he was found to have the power within him, he was brought by the scientist Allekant as an experimental material. Orphelia becomes very strong but her character turns very cold. He didn't want julis to interfere with his business so he almost killed him. Its power is to bring forth a kind of poisonous smoke and large, powerful shadowy hands, because of this power it can't touch the plants that it loved so much in the past.

The scientist Allekant who has turned orphelia into monsters. He had come to Ayato and said that he was the only one who could heal Ayato's brother from his coma. It only appeared briefly

Well ... how about minna? As usual Mimin provides as detailed information as possible so that this anime can be well known, even though the admin doesn't want to reveal the contents of the ight novel, aka spoilers. That's enough for the discussion of season 2, hopefully it will continue to season 3 hehehhehehe

Attack on Titan: Why is Levi Ackerman so powerful?

- Why is Levi Ackerman so powerful? We answer that question and also solve the secret of the Ackerman family in Attack on Titan.