5 Most Influential Supporting Characters in the Naruto Series


Most of the Naruto series focuses on the adventures of Naruto Uzumaki in fighting against evil ninjas and pursuing his dream of becoming a Hokage . Because they are too focused on Naruto, fans often forget about some of the supporting characters who actually have a big influence in the world of Naruto .

Although rarely shown and often forgotten, these five supporting characters bring big changes to the world of Naruto . Are you curious about the characters? Check out the following reviews.

Yahiko is one of the three Amegakure ninja who founded Akatsuki. Together with Nagato and Konan, Yahiko founded Akatsuki to stop the war and create a peaceful world. However, everything changed after he died in front of Nagato.

Danzo and Hanzo teamed up to destroy Akatsuki. Then, Nagato was faced with two difficult choices, where he could only save one of Yahiko or Konan. T

When he wanted to see his friend's death, Yahiko willingly pushed his body towards Nagato who was holding the kunai. After being influenced by Obito, Yahiko's death eventually led Nagato to start taking Akatsuki on the wrong path.

Compared to other Akatsuki members, Zetsu is one of the characters that is not very often featured in this series. Even so, he had a great influence in the shinobi world .

Zetsu was the one who had manipulated Madara, and also indirectly manipulated Obito and Nagato. Zetsu changes the writing on the Uchiha stone tablet, where he mentions that the Infinite Tsukuyomi is the only way to find peace.

This ultimately turned Madara into evil, and then triggered the Fourth Shinobi War. Everything Zetsu did to revive his creator, Kaguya Otsutsuki.

Rasa is the fourth kazegake in Sunagakure, as well as the father of Gaara. In a way, Rasa was the one who turned Gaara into a monster.

Rasa too forced Gaara to become a One-Tailed Jinchuuriki. Until when he started to be afraid of Gaara's power, Rasa several times tried to kill his own son.

When his village was on the verge of collapse, Rasa also decided to join forces with Orochimaru. However, instead of getting what he wanted, Rasa was betrayed by Orochimaru, allowing Orochimaru to freely utilize the power of Sunagakure.

Then, they again infiltrated Konoha to bring Sasuke. Thanks to the Four Sounds, the young ninjas sent to bring Sasuke back fail their mission. Without the Four Voices, Orochimaru might never get Sasuke.

You could say, Izuna's death was one of the reasons why the Uchiha clan and the Senju clan were never able to make peace. Even after the two clans worked together to build Konoha, the dispute between the two clans still remained.

Izuna's death is also one of the reasons why Madara decided to become a criminal. Because even though Madara had already forgiven Tobirama who was responsible for the death of his younger brother, Madara felt betrayed when he learned that the Senju clan still had great hatred for the Uchiha clan.

Therefore, Madara felt that his younger brother's death was in vain, because no matter what he did, the Senju clan still could not let go of their hatred for the Uchiha clan.

Precursors
Emakimono and kagee are considered precursors of Japanese animation.[14] Emakimono was common in the eleventh century. Traveling storytellers narrated legends and anecdotes while the emakimono was unrolled from the right to left with chronological order, as a moving panorama.[14] Kagee was popular during the Edo period and originated from the shadows play of China.[14] Magic lanterns from the Netherlands were also popular in the eighteenth century.[14] The paper play called Kamishibai surged in the twelfth century and remained popular in the street theater until the 1930s.[14] Puppets of the bunraku theater and ukiyo-e prints are considered ancestors of characters of most Japanese animations.[14] Finally, mangas were a heavy inspiration for Japanese anime. Cartoonists Kitzawa Rakuten and Okamoto Ippei used film elements in their strips.[14]

A frame from Namakura Gatana (1917), the oldest surviving Japanese animated short film made for cinemas
Animation in Japan began in the early 20th century, when filmmakers started to experiment with techniques pioneered in France, Germany, the United States, and Russia.[10] A claim for the earliest Japanese animation is Katsudō Shashin (c. 1907),[15] a private work by an unknown creator.[16] In 1917, the first professional and publicly displayed works began to appear; animators such as Ōten Shimokawa, Seitarō Kitayama, and Jun'ichi Kōuchi (considered the "fathers of anime") produced numerous films, the oldest surviving of which is Kōuchi's Namakura Gatana.[17] Many early works were lost with the destruction of Shimokawa's warehouse in the 1923 Great Kantō earthquake.[18]

By the mid-1930s animation was well-established in Japan as an alternative format to the live-action industry. It suffered competition from foreign producers, such as Disney, and many animators, including Noburō Ōfuji and Yasuji Murata, continued to work with cheaper cutout animation rather than cel animation.[19] Other creators, including Kenzō Masaoka and Mitsuyo Seo, nevertheless made great strides in technique, benefiting from the patronage of the government, which employed animators to produce educational shorts and propaganda.[20] In 1940, the government dissolved several artists' organizations to form the Shin Nippon Mangaka Kyōkai.[a][21] The first talkie anime was Chikara to Onna no Yo no Naka (1933), a short film produced by Masaoka.[22][23] The first feature-length anime film was Momotaro: Sacred Sailors (1945), produced by Seo with a sponsorship from the Imperial Japanese Navy.[24]

Momotaro: Sacred Sailors (1945), the first feature-length anime film
The 1950s saw a proliferation of short, animated advertisements made in Japan for television broadcasting.[25] In the 1960s, manga artist and animator Osamu Tezuka adapted and simplified many Disney animation techniques to reduce costs and limit frame counts in his productions.[26] He originally intended these as temporary measures to allow him to produce material on a tight schedule with an inexperienced staff, though many of his limited animation practices would later come to define the medium's style.[27] Three Tales (1960) was the first anime film broadcast on television;[28] the first anime television series was Instant History (1961–64).[29] An early and influential success was Astro Boy (1963–66), a television series directed by Tezuka based on his manga of the same name. Many animators at Tezuka's Mushi Production would later establish major studios (such as Madhouse, Sunrise, and Pierrot).

The 1970s saw growth in the popularity of manga, many of which were later animated. Tezuka's work—and that of other pioneers in the field—inspired characteristics and genres that remain fundamental elements of anime today. The giant robot genre (also known as "mecha"), for instance, took shape under Tezuka, developed into the super robot genre under Go Nagai and others, and was revolutionized at the end of the decade by Yoshiyuki Tomino, who developed the real robot genre.[30] Robot anime series such as Gundam and Super Dimension Fortress Macross became instant classics in the 1980s, and the genre remained one of the most popular in the following decades.[31] The bubble economy of the 1980s spurred a new era of high-budget and experimental anime films, including Nausicaä of the Valley of the Wind (1984), Royal Space Force: The Wings of Honnêamise (1987), and Akira (1988).[32]

Neon Genesis Evangelion (1995), a television series produced by Gainax and directed by Hideaki Anno, began another era of experimental anime titles, such as Ghost in the Shell (1995) and Cowboy Bebop (1998). In the 1990s, anime also began attracting greater interest in Western countries; major international successes include Sailor Moon and Dragon Ball Z, both of which were dubbed into more than a dozen languages worldwide. In 2003, Spirited Away, a Studio Ghibli feature film directed by Hayao Miyazaki, won the Academy Award for Best Animated Feature at the 75th Academy Awards. It later became the highest-grossing anime film,[b] earning more than $355 million. Since the 2000s, an increased number of anime works have been adaptations of light novels and visual novels; successful examples include The Melancholy of Haruhi Suzumiya and Fate/stay night (both 2006). 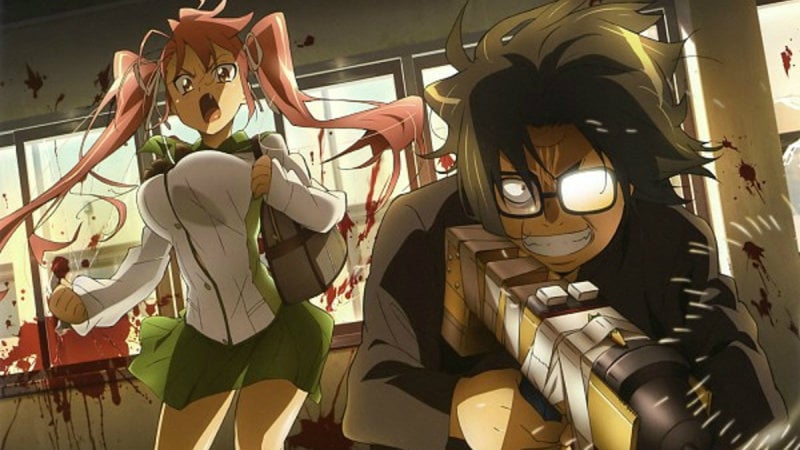 Best Horror Anime With Elements Of Gore That Is Very Horrible

- This time will provide the Best Horror Anime Recommendations with the addition of Gore for those of you who are looking for it.